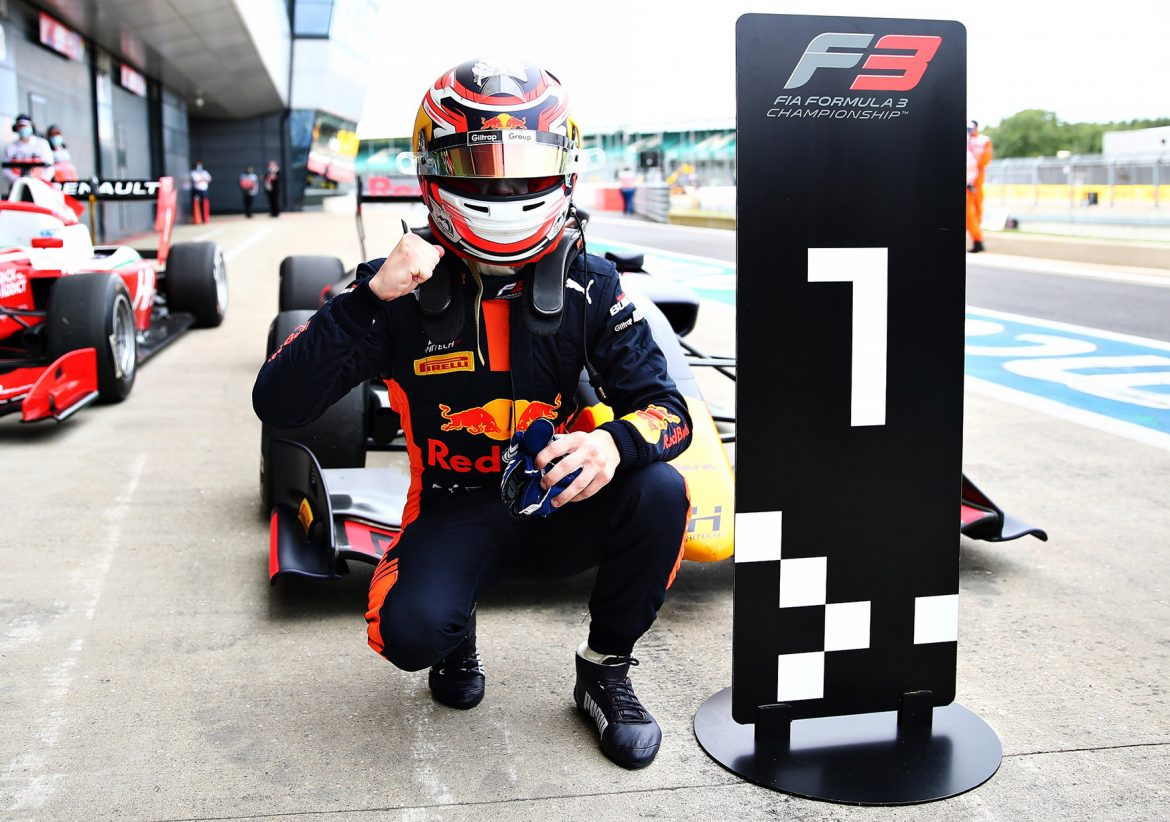 Winning the feature race at Silverstone along with a points-collecting finish in the reverse grid race has put Liam Lawson closer to the Formula 3 championship leaders as the series nears the half-way mark.

The Red Bull Junior driver stole the lead of the opening race on the first lap with a bold move at Stowe corner and then led for the duration, which strangely ended with Lawson taking the chequered flag in pit lane.

A late race accident put the field behind the Safety Car with less than four laps to go. On the final tour Lawson was advised to lead the remaining 24 cars down pit lane to end the 20-lap race.

Lawson started on the front row of the grid after his best qualifying so far this season for his Hitech GP racing team in the #5 Porter Group/Giltrap Group-sponsored car.

He had pole snatched from him in the dying seconds of qualifying, beaten by 0.058-second.

After taking his second victory of the season, Lawson admitted that he struggled with the degradation of his tyres, but was happy with the progress to qualify in second place.

“I’m obviously very happy. As I said yesterday, we did a lot of work, mainly for qualifying because that’s where we’re struggling so far this season. It was nice to have a good quali.

“The race car today was good. I think we definitely need to work on it. I was struggling a little bit towards the end of the race, but it was basically about managing it. We did a lot of prep for this. I’m really happy and proud of the team for all their hard work.”

Two periods behind the Safety Car in quick succession towards the end of the race helped Lawson from suffering even worse tyre wear and made it easier for him to defend his lead.

“I wouldn’t say that I felt like I had it completely under control, but the safety car definitely helped. It took away laps and I think we were struggling a little bit more with the tyres. It played to us a little bit today, which was good.”

However, the tyre degradation got no better in the reverse grid race the following day. A burst from 10th to 6th lasted for most of the race but towards the end he fell back one more spot.

Scoring the maximum race points for the feature win and 4-points for 7th place has elevated Lawson from 8th to 5th in the standings in just one round. It also reduced the deficit to championship leader Oscar Piastri (Prema Racing) who failed to finish the reverse grid race with a mechanical failure.

Lawson’s championship challenge took a hit at the previous round in Hungary when he failed to finish both races due to engine failures.

A repeat meeting at Silverstone next weekend, the last double-header on the revised COVID calendar, will see the series reach halfway.