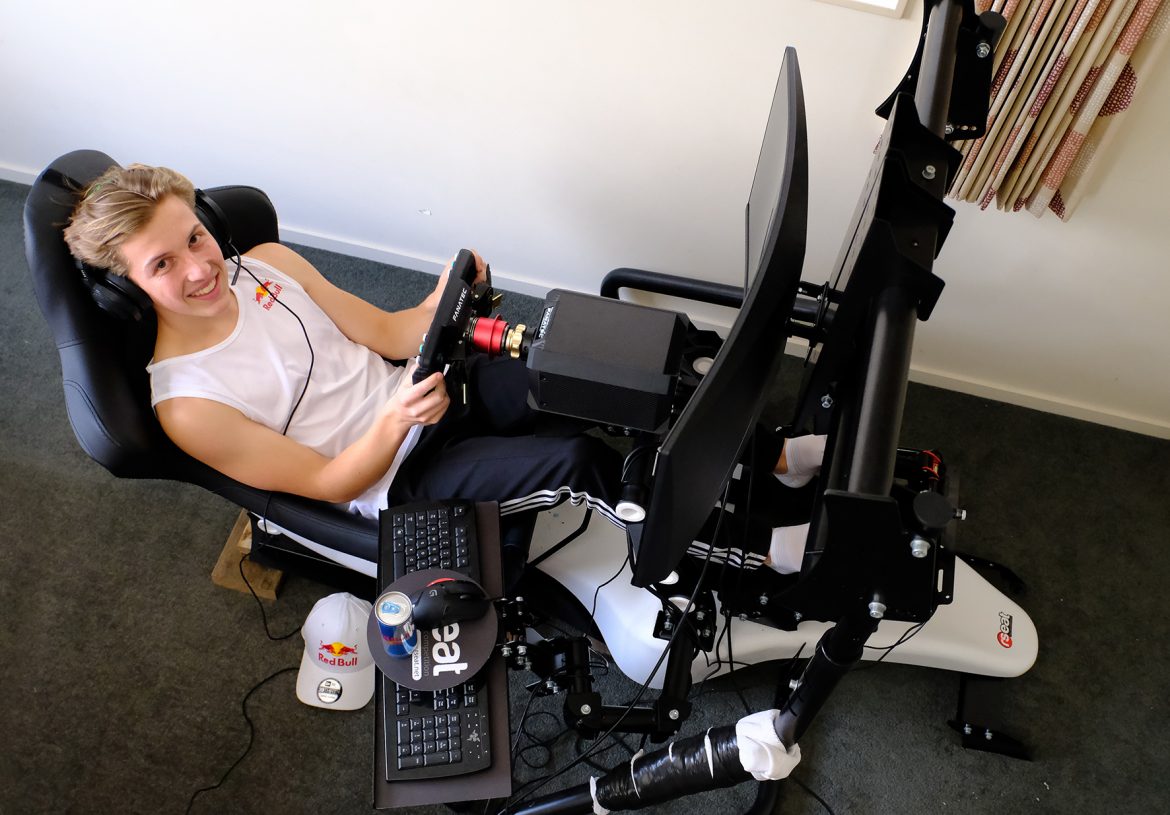 Liam Lawson is counting down the days to the start of the FIA F3 championship when his racing goes from virtual to reality.
Since COVID-19 lockdown, like many racing drivers, the Red Bull Junior driver has been iRacing in numerous championships, even joining the converted grid of the Formula 1 Virtual Series.
But in a fortnight the racing will be real when the opening round of the F3 series starts alongside the 2020 Formula 1 championship at Spielberg in Austria.
Lawson arrived back in the UK at the beginning of June to prepare for the quick-fire season, and points out that apart from taking part in online racing, his simulator is an important training tool.
“I think the biggest advantage of sim racing is being able to drive all sorts of cars around any tracks you like. iRacing is constantly being updated so new content is always being released and the program is becoming more and more accurate every month.
“There is definitely an art to sim racing. In real life you have all the feeling of the car coming through your whole body, where as in the sim it’s limited to visual and what you get through the wheel.
“My favourite [iRacing] car is the F3. The model is really accurate and the racing is always good. The setup changes are quite accurate, and just like real life there is so much you can change and make the car better.”
Lawson’s personal driving coach, Enzo Mucci, explains why sim work is so vital.
“Drivers can improve their personal performance and mental skills, learn tracks they’ll be racing on when real life racing starts again and keep improving themselves in nearly all areas.
“For me the biggest thing is mental, for a driver to improve their performance on demand, do qualifying runs and stay focused in races.”
In Mucci’s normal training regime, it is quite different to online racing.
“I use it more for one-on-one training. So the driver will have set skills, like qualifying drills, lap time consistency over long runs, race-craft and certain driving techniques, like braking, overcoming mistakes and distractions whilst driving.
“Before a sim session I will have a small list of areas that a driver needs to improve on and a series of measurable drills that can help train in each area.”
Mucci also organises Pressure Days, where he gets six drivers together and teaches them how to perform on demand whilst in a pressure environment.
And in an age of limited testing, sim preparation is helping advance drivers in a way that previous generations couldn’t.
All FIA F3 testing is now cancelled for the rest of the season, and with drivers getting just one 40-minute Practice session at each round before Qualifying, the world of sim training is vital preparation.
Apart from the sim work Lawson does at home and with Mucci, he also takes part in simulation work at Red Bull’s F1 headquarters in Milton Keynes.
The Red Bull facility is a huge step-up to his home unit. The simulator is two storey’s high!
Lawson will make his racing debut for Hitech GP at the Red Bull Ring. This season he will pilot the #5 car, flying the Kiwi flag and supported by Porter Group and Giltrap Group.
The season starts over the first weekend in July, 3rd to 5th, with two back-to-back rounds at the Red Bull Ring in Austria over consecutive weekends.
Each round features two races, one each on Saturday and Sunday.
Tags: